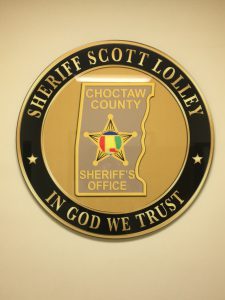 On Tuesday, December 24, 2019 at approximately 6:30 A.M, deputies received a call of a domestic dispute at a home located on County Road 7.  Upon their arrival, deputies were informed that the lady and her children had fled the home by crawling out of the bedroom window.  Deputies were also informed that the suspect was armed with a 9 millimeter pistol.  Attempts were made to communicate with the suspect in order to get him outside of the home.  At approximately 10:02 A.M., after multiple attempts proofed unsuccessful, deputies made entry into the home and arrested the suspect.  A 9 millimeter pistol was also recovered.  Eddie Lorenzo Owens of Brandon, Mississippi was charged with Domestic Violence (Strangulation) 2nd, Resisting Arrest, and Forbidden Person in Possession of a Pistol.  Owens was transported to the Clarke County Jail where he currently remains.  The Choctaw County Sheriff’s Office will consult with the U.S. Attorney for their consideration in possible federal charges.

Choctaw County Sheriff Scott Lolley would like to thank the  deputies and the Alabama Department of Conservation Officer who assisted for performing an excellent job in handling this situation.

« Second arrest for Hindering Prosecution December deputy of the quarter »