Further Investigation has revealed that Billy James McGrew has successfully made it to the city of New Orleans.  McGrew called family while at a CVS pharmacy.  When family arrived to the pharmacy they discovered that he had already left.  New Orleans Police Department was called to the pharmacy where they took a report and issued a case number.  McGrew is still considered missing until he returns to family or until police locate him.  The Choctaw County Sheriff’s Office along with the Alabama Fusion Center will begin coordinating with New Orleans Police tomorrow.

The Choctaw County Sheriff’s Office needs your help in locating Billy James McGrew.  McGrew left Shady Grove Friday morning in route to New Orleans, LA.  McGrew’s route of travel would probably be US 84 to Laurel, MS and I 59 South to Louisiana. 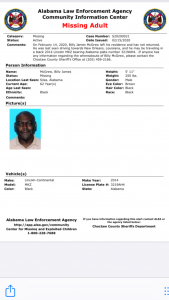